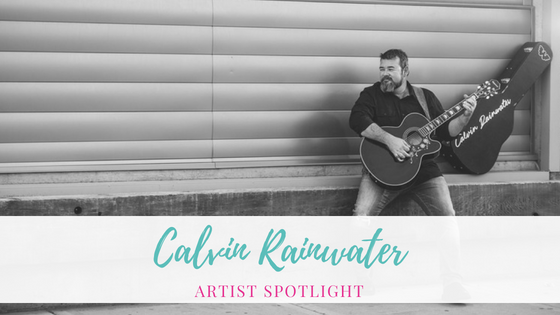 Hope you are ready for some good outlaw country music. Today’s artist spotlight is on Calvin Rainwater and his recently released Sinners & Saints – EP. Steel guitar and that country twang, are the sounds you will hear when listening to Sinners & Saints EP.

My favorite song from the Sinners & Saints EP is the self-titled track “Sinners & Saints”. This song is real, it’s feelings that many people have felt and do feel. It is a song that some can relate to. It keeps that old school country vibe that makes you tap your foot.

“If We Could Go Fishing One More Time” is another one of those songs that just give you old school, classic country. As I like to say, “real country music”. This is not country-pop!! It’s about family and good times and remembering those who are dear to our heart and are no longer here.

Each song on Sinners & Saints EP, are outstanding, each with its own distinct sound. If you are looking for some new tunes to add to your playlist, these are worthy. Calvin Rainwater has his own unique sound but stays true to country music at the same time. Calvin Rainwater was raised in a small town in Arizona. He has always felt a passion for music. Drawn to his grandfather’s guitar, he would often spend hours sitting on the lowest brand of his grandmother’s orange tree, playing around with the guitar and singing Don Williams to the sound of it. He began taking guitar lessons from a neighborhood friend’s father at the age of eight.

Country music has always rung close to Calvin Rainwater’s heart. A country singer, performer, and songwriter, Calvin is before everything else, a storyteller and when he writes music, he writes it from his heart, often finishing up entire pieces in a single sitting.

A tragic family accident and the loss of his brother drove him away from his hometown and he relocated to Phoenix. Leaving his home transformed his life and had a profounded effect on his music. When sitting down to write, Calvin often reflects on his achievements and failures, thoughts and feelings until he finds that special spark that will bring his next song to life.

Having recently released his first EP Sinners & Saints, Calvin now has a full band backing him up for live performances. Despite his success, he sees himself as a small part of a giant world and does his best to leave his mark by inspiring others.

He is the former frontman, singer, and guitar player for the band Common Ground Country aka CGC. The band performed gigs from 2000 to 2005.

Check out the video for “Tonight I Told My Dream Girl Goodnight”.