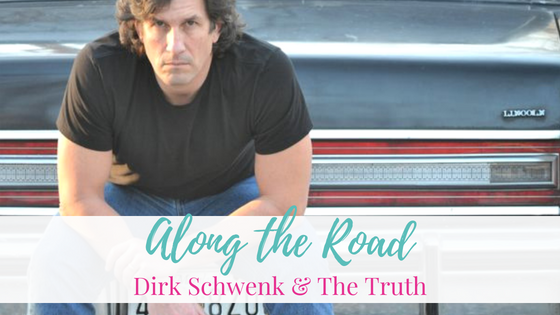 If you are ready for a journey, Along the Road by Dirk Schwenk will take you on a musical one. Adventures along the road, the riverside, you will enjoy listening to this album into the sunset. The first song sets the story for this album. It’s easy listening, rock, and country all mixed together. My favorite song from the Along the Road is “The River”.  This a nice song, you feel the country music vibe flowing from this song with the banjo playing throughout.  This song will have you wanting to hang out, fish, or relax by the riverside (or other body of water).

Dirk Schwenk says Along the Road had its origins in 2012 as I sat and cried watching the documentary “Marley.” I was overwhelmed that a songwriting talent like Bob could be lost to the world so young, with so many songs not yet put down. And there were so many others, too… Cat Stevens had walked away; Stevie Way gone by accident; Otis Reading to a gunshot; and too many to overdose. It broke my heart that the world would never hear the songs that they should have finished. And it made me sad that I too had failed to get my songs out for anyone to hear.

Along the Road grew from that moment and a serendipitous meeting with Matt “All Day” Asci one, of the United States Air Force band Max Impact, who produced this project. His otherworldly playing, an ear for harmony and knowledge of the industry was a godsend. Without him, I just did not know how to move the songs from what I heard in my mind to finished works. The record was engineered and recorded at Bias Studio in Virginia with the great Bob Dawson, producer of Mary Chapin Carpenter’s triple-platinum album “Come On Come On” as well as Dave Matthews “Recently” and “Remember Two Things. Dirk Schwenk is an award-winning songwriter who combines singable songs with thoughtful lyrics and puts the package in the sweetest parts of the Rock, Folk and Americana genres.  He fronts the southern-rock tinged The Truth and is out with a top-shelf recording “Along the Road” in 2018.

Schwenk has always written great songs but mostly lived a life away from music – world travel, marriage, sailing, raising sons, a legal career, environmental and political activism. The highs and lows of those real-life experiences shine through in the songs.

“Along the Road” was born in the chance neighborhood meeting of Schwenk and Matt “All Day” Ascione – producer and elite guitarist.  That collaboration led to fantastic session players, a wealth of knowledge and finally recording and sessions with Grammy award-winning sound engineer Bob Dawson of Bias Studios.  This is the record Schwenk did not want to put off any longer.